If you are interested in becoming a Community Associate of the GLRC, please fill out this form.

Jordan Brennan
Jordan works as an economist for Unifor, Canada’s largest private sector labour union. He is also a research associate of the Canadian Centre for Policy Alternatives and, from 2016 to 2018, was a visiting scholar at Harvard Law School. Jordan holds a bachelor degree in economics and accounting from Wilfrid Laurier University. His master’s and doctoral degrees, both in political science, were conferred by York University. Jordan’s scholarly research has examined the interplay between long-term structural adjustments in the political economy and the distribution of income, including published research on corporate concentration, labour unions, inflation, trade and investment liberalization, corporate governance, the minimum and living wages and corporate income taxation. His research and writing has appeared in academic forums and in popular media outlets, including the Toronto Star, Globe & Mail, National Post, CBC News, Radio Canada International and Maclean’s Magazine. Follow him on Twitter: @JordanPWBrennan.

Angelo DiCaro
Angelo DiCaro is Acting Director of Research with Unifor, Canada’s largest private sector union. Angelo oversees a variety of research files, including trade policy as well as sector work in auto, retail and media. Part of his role also involves coordinating the union’s Strategic Planning Committee. A labour activist prior to coming on staff with the union, Angelo held a number of elected union positions as a member of Unifor Local 414, including shop steward and bargaining committee representative, while working as a part-time meat clerk at Dominion Stores (now Metro Stores) in Toronto. He holds a Masters of Industrial Relations degree from the University of Toronto as well as degrees in Labour Studies and Sociology from York University. Angelo has been on staff with Unifor (formerly the Canadian Auto Workers union) since 2006. You can follow him on twitter @sindicato9.

Guio Jacinto
Guio Jacinto is an economic researcher with the United Steelworkers in the Department of Research, Collective Bargaining and Public Policy. Guio provides bargaining and economic/financial analysis support to various locals, particularly in the mining and long term care sectors. His main research interests are in the areas of macroeconomics, monetary and fiscal policy, labor economics and the economics of trade unions. Prior to joining the Union as a staff member, Guio worked in the steel industry and was a member of USW local 14162, where he was a member of the bargaining committee and Trustee for the local. He holds a BA in Political Science from McMaster University and an MA in Political Science from York University where he is also a PhD candidate.

Manzur Malik
Manzur Malik works for the Ontario Public Service Employees Union (OPSEU) as a Research Officer. He has been with OPSEU for over a decade. Prior to OPSEU, Manzur worked within the labour movement in various capacities. In Bangladesh, he was the Campaigns Coordinator at the Solidarity Centre (affiliated with the AFL-CIO), where he worked towards improving labour relations in the garment sector. Later in Ontario, Manzur briefly worked as an organizer for UNITE HERE. During graduate school at York University, while working as a Teaching Assistant, Manzur became increasingly involved with his Union – CUPE 3903. He was first elected as a VP and then subsequently as its Chair. Manzur is passionate about social justice and his expertise are in the areas of collective bargaining, interest arbitration, and public policy.

Farah Mawani
Farah Mawani, MSc, Ph.D., has over 20 years of experience in global, national, and local community-based research, teaching, policy, and program development focused on social determinants of mental health inequities, with particular expertise in immigrant and refugee mental health inequities, and global Indigenous health inequities. Her doctoral thesis in Public Health Sciences (Epidemiology specialization) at the Dalla Lana School of Public Health, University of Toronto, focused on Conceptualization, Measurement, and Association of Underemployment to Mental Health Inequities between Immigrant and Canadian-born Labour Force Participants. Her current two-year CIHR Health System Impact Fellowship, with Dr. Patricia O’Campo (health system mentor), MAP Centre for Urban Health Solutions at St. Michael’s Hospital in Toronto, Ontario, and Dr. Sarah Flicker (academic mentor), Faculty of Environmental Studies, York University, provides an invaluable opportunity to grow her contribution to reducing health inequities between and within countries. With the support of a CIHR Healthy Cities Planning Grant, she is leading the development of a MAP Solutions Network, a multi-city implementation science partnership and research program for scaling Building Roads Together, an evidence-based community-based peer walking group program she designed to increase health equity. She is also improving conceptualization, measurement, and monitoring of inequities in social determinants and health, and actions to reduce them. She prioritizes building capacity for health system leadership by people with lived experience of exclusion and health inequities in all her work.

Tsitsi Mpofu-Mketwa
Tsitsi Mpofu-Mketwa recently completed her PhD thesis on informal women traders in Langa township, Cape Town in June 2020. The study investigated how isiXhosa-speaking women traders in Langa township exercised agency in ways that they responded to structural constraints and opportunities. She has taught courses on informality and precarious work. Her research interests are in applied community-based research in relation to poverty,sustainable livelihoods, inequality, social development in the context of migration and neoliberalism.Tsitsi is a social worker by profession and has worked in vulnerable communities in the Cape Flats of Cape Town South Africa. Influenced by her social work background, Tsitsi has experience in applied research that inform development practice and intervention to promote human development and well-being.She co-founded the SA Migrant Solidarity a humanitarian initiative, collaborating seven researchers, academics and development practitioners supporting vulnerable refugees and immigrants in Cape Town affected by the COVID-19 pandemic through a food relief project. Tsitsi has worked in different research units at the University of Cape Town on projects relating to violence against women and girls, child and youth well being, informal traders and energy use in South African townships.She is currently writing journal articles from her PhD thesis.

Chris Roberts
Chris Roberts is the National Director of the Social and Economic Policy Department of the Canadian Labour Congress (CLC). Canada’s principal labour central, the CLC is the umbrella organization for more than 50 affiliated Canadian and international unions, as well as 13 provincial and territorial federations of labour, and over 100 regional labour councils. The role of the Social and Economic Policy Department of the Congress is to provide research support and policy advice to the elected leadership and affiliated unions of the CLC. Chris joined the Congress in 2011, and assumed the role of National Director in 2014. Prior to his current work, he received a Ph.D. in Political Science from York University, and completed a post-doctoral fellowship at McMaster University. Chris is author of Pension Confidential (Lorimer, 2012), with Robert Drummond, and co-editor of The Contradictions of Pension Fund Capitalism (LERA, 2018). He lives and works in Ottawa.

Victoria Scott
Ms. Viki Scott, RC (c); BSc; RRP; CHRM; MBA; ADR (c) is the President and Principal Consultant of Scott & Associates Inc. She currently manages a successful National Consulting Firm of which provides solutions to Canadian based companies with at concentration in Labour Management Relations, Conflict Risk Management, Occupational Health and Safety , Human Rights, Workplace Investigations, Organizational Development and Effectiveness, and General Business Advisory Services. Her firm also provides lobbying and advocacy services to their not for profit and broader public service clients. Viki has an extensive history with both the public and private sectors, primarily in unionized environments. She has led significant change management initiatives for major public, non for profit and private sector organizations. Viki has a particular expertise in labour management relations, with both employer and union sided experience, and has been successful in introducing workplace interest based consensus models for managing identified areas of conflict. She has established a reputation for the effective work she has led resulting from her Transformative Mediation skills she brings to the parties for resolving conflict.Her leadership positions include the Ontario Ministry of Community Safety and Correctional Services, Workplace Health and Safety Agency, OPSEU, Extendicare, Canada, KPMG. 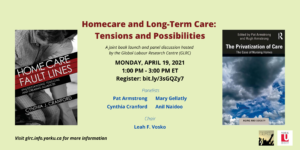 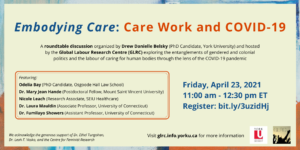 Join us for a roundtable discussion on Embodying Care: Care Work and COVID-19, organized by Drew Danielle Belsky (PhD Candidate, York University). This virtual panel invites presenters and participants to explore the entanglements of gendered and colonial politics and the labour of[...]
View Calendar