“The last five months, I was able to survive working illegally while trying to restore my status, my situation. But with the threat of Coronavirus, almost everything was shut down, including my job. And as much as I wanted to look for another job so I can continue to provide for myself and for my family, I feel helpless. Since April 1st, I was out of a job, I'm trying my best to be a good person by staying home so I can help not to spread the virus.” – Markus, migrant worker

This statement by Markus comes from “Precarious Workers and Precarious Housing: Investigating Stories of Migrant Workers’ Housing Struggles in Edmonton, Alberta,” a report written by members of Alberta Workers Association for Research and Education (AWARE), Migrante-Alberta, and York University. The report investigates the current and ongoing challenges the migrant worker community in Edmonton faces around homelessness and housing insecurity. Their research reveals that migrant workers face the following challenges: racialized stigma as migrant workers and/or as racialized immigrants that makes it harder for them to rent apartments; low wages; precarious immigration status; on-going employer surveillance; a lack of access to formal housing supports; gender-based violence; health issues; and the absence of feeling at-home. 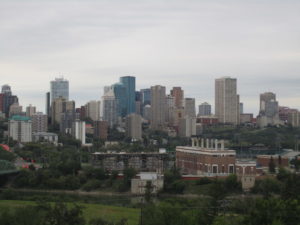 The connection between immigration, labour, and housing

In the report, migrant workers discuss switching into different immigration programs, all in an attempt to regularize their status. Temporary foreign workers who find that their work permits are expiring, for example, apply for acceptance into colleges so they can instead stay in Canada as international students, which they then hope will open the doors for permanent residency. Constant attempts to get a foothold into Canada by switching into different immigration programs cause numerous challenges. Namely, their ‘temporary’ status exposes them to external forces beyond their control such as their visas expiring, policy changes, employer decisions, and the security of their networks.

Indeed, as echoed by many participants in the report, the immigration status of migrant workers largely determines their housing and job security as it dictates the number of hours they can work and how many employers they can work for. For example, live-in caregivers and ‘low-skilled’ temporary foreign workers are only allowed to work for one employer, and those with international student visas can only work 20 hours per week. Both arrangements limit the earning capacity of migrant workers.

Thus, the issue of homelessness and housing insecurity for migrant workers are interconnected with other factors such as the precarious nature of their immigration status and its ties to their employment contracts.

The impact of COVID

In the face of the COVID-19 pandemic, these issues have been further exposed and exacerbated. As discussed by Markus and other participants in the report, COVID-19 has primarily impacted migrant workers at work, with their employers changing their job responsibilities and work hours. For some workers, their employers have reduced their work hours (at best) or laid them off (at worst), thereby reducing their income and thus reducing their capacity to pay rent. Moreover, because migrant workers’ visas are tied to a single employer, they cannot easily change jobs when their hours have been reduced and when they have been laid off.

This new reality has led some migrant workers to access informal networks for housing support, such as living with their friends who have offered them accommodation. However, for others, such as live-in caregivers, the pandemic has changed their entire living situation as most employers now work from home. This living arrangement further heightens the issue of employer surveillance, as indicated in the report, and increasingly obscures personal/work boundaries between live-in caregivers and their employers.

“There are a lot of cops in the street, just looking for whatever people are doing. And I’m scared of that because of this pandemic. Even if I am not doing anything wrong, for example, if I am not wearing a mask, or if I cough in the street or something connecting me that I got the virus, right? Like if they are going to take me and ask me for my ID, or everything? And that’s my fear. What am I going to show them to prove who I am? If they find out that I don’t have a status, you know that’s my fear too.” – Abby, migrant worker

As expressed by Abby, the larger context of the pandemic has instilled a heightened sense of fear, stress, and insecurity for migrant workers in respect to their livelihoods, especially with an increased protocol around policing. Many face uncertainty around their immigration application process, the loss of their status, and when they can see their families.

With these concerns in mind, the report makes the following recommendations: coordination between government actors and community organizations to effectively support migrant workers; regularization policies and programs to allow every resident access to services; and development of a community centre catering to the needs of migrant workers. While the report does not specifically discuss the importance of paid sick leave because of its focus on migrant workers’ housing challenges, we strongly believe that paid sick leave for all workers is essential to reducing migrant precarity. These recommendations were made in hopes that these issues will be addressed and alleviated to support the migrant worker community in a time as pressing this pandemic.