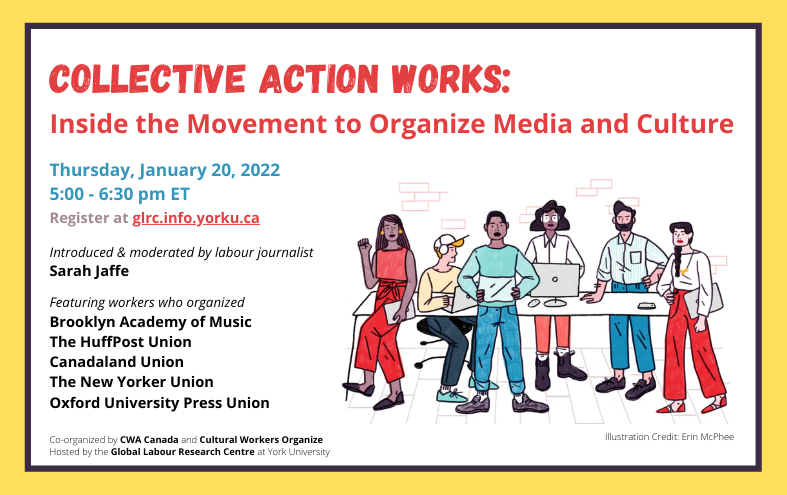 Labour journalist and author Sarah Jaffe hosts a virtual forum on organizing in the media and cultural sectors. As the digital media union movement has not let up for more than five years now, and as the pandemic begins to recede, it’s time to take stock of what we’ve won, to reflect on new strategies, and to frankly assess the challenges that lie ahead.

Union members in new media and culture unions discuss what they’ve won through collective bargaining, what’s sustaining the push to organize amid the pandemic, and how equity goals are reflected in their campaigns.

Co-organized by CWA Canada and Cultural Workers Organize and hosted by the Global Labour Research Centre at York University. 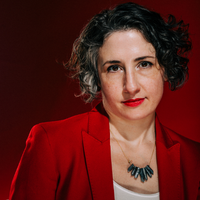 Sarah Jaffe is the author of Work Won’t Love You Back: How Devotion to Our Jobs Keeps Us Exploited, Exhausted and Alone and of Necessary Trouble: Americans in Revolt, both from Bold Type Books. She is a Type Media Center reporting fellow and an independent journalist covering the politics of power, from the workplace to the streets. Her work has appeared in The New York Times, The Nation, the Guardian, the Washington Post, The New Republic, the Atlantic, and many other publications. She is the co-host, with Michelle Chen, of Dissent magazine’s Belabored podcast, as well as a columnist at The Progressive and New Labor Forum. 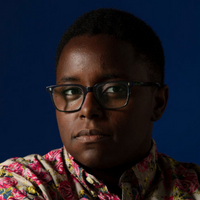 Kaitlyn Chandler is a motion designer and labor activist. She worked at the Brooklyn Academy of Music (BAM) for 5 years and she helped to organize BAM’s administrative and creative workers. She currently works at Droga5 and earned a B.F.A. from the Memphis College of Art in 2013. Kaitlyn was raised in Nashville, Tennessee and lives in Brooklyn, New York. 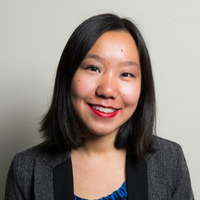 Marina Fang is a national reporter at HuffPost who covers the intersection of culture and politics, including diversity and representation in race and gender, issues surrounding Asian American identity, as well as general movies and television. She has been a fellow at the Eugene O'Neill Theater Center’s National Critics Institute, a leading program for arts and culture writers, and the Poynter Institute's Power of Diverse Voices writing program. She frequently mentors young journalists and advocates for racial and gender equity in journalism. She serves on HuffPost's union committee and is a proud member of the Writers Guild of America, East. Raised in Pittsburgh and a graduate of the University of Chicago, Marina lives in Brooklyn, NY. 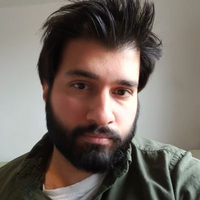 Arshy Mann is the host and co-producer of COMMONS, a podcast from Canadaland. He is a longtime journalist and has worked for Xtra, Canadian Business, Canadian Lawyer and Toronto Star. He was part of Canadaland’s recent union drive and has served as part of the union’s bargaining committee. 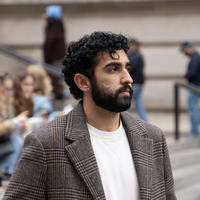 Naib Mian is a writer, producer, and editor based in New York City. He works on interactives and multimedia at The New Yorker, where he is also Unit Chair of the union and served on the bargaining committee, helping to negotiate and win a contract this past summer. In addition, Naib is a Senior Editor at the South Asian Avant-Garde Anthology, where he edits multimedia, reportage, and essays. 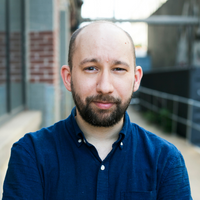 Scott Morales is a Brooklyn-based actor and Strategy & Transformation Coordinator for Oxford University Press. He has been a part of the unionizing effort at OUP for the past two and a half years and helped to deliver an election win for the union in the fall. He has since been serving as the unit chair of the OUP USA Guild and on the bargaining committee. He's proud to be a member of two unions, one he helped to build.