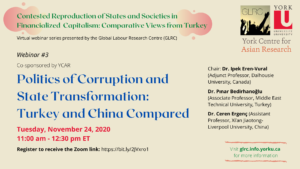 Problematizing the recent AKP-led radical transformations in state as a form of clientelism within Turkey’s so-called ‘crony capitalism’ has become popular among liberal critical studies on Turkish politics. Such analyses, besides reproducing the outdated neoliberal argument that associated the failure of free-market ‘reforms’ with governments’ ill implementation of them, also overlook the more fundamental transformations taking place in the public-private divide in Turkish capitalism, a process that has been indeed redefining simultaneously the modern historical political form of the state.

Highlighting the privatized, personalized, and hence discretionary reorganization of the state under the sui generis Presidential System of Government, which has been in force since July 2018, this presentation will argue that the aggravated class contradictions of Turkey’s financialized capitalism can no more be managed by the established modern boundaries between the state and civil society in the country, forcing the AKP rule to experiment new political practices of ‘privatizing the state’, borrowing Beatrice Hibou’s conceptualization, to remain in power.

The fierce anti-corruption campaign targeting mostly CCP members in China is often taken as an attempt at institutionalization in the absence of checks and balances. This overall conclusion in the existing literature is based on the assumption that the state is to serve the general interest in a neutral position. This presentation, however, claims that both corruption and anti-corruption are to promote certain political economic agendas pursued by the dominant class in power.

The rampant corruption at the local level in the initial periods of the Reform and Opening Up was framed as a temporary flexibility to promote rapid economic growth. While achieving this goal, it went beyond guanxi capitalism and created a class who would unconditionally support the regime throughout the following decades. The neoliberal social policies and the anti-corruption campaign during the most recent leadership era confirm that the ultimate aim is not necessarily transparency of public policy processes but to enable the consolidation of the regime-supporting class.